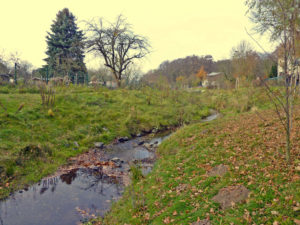 Since a long time there exists the wish to bring Darmstadt”s only little river back to the daylight. A first segment, outside the city center, but near to the University campus, has been realized (click on picture to the right).

However the local parliament stopped an already ongoing daylighting project in 2009 after the local press heavily campaigned for this stop.

Many citizens of Darmstadt, however, did not accept the funeral of a living river. They never stopped to argue to bring this project back to life. As also for me water is the essence of life and water conservancy therefore is one of our most important subjects, I became part of this fight against ignorance and neglect.

There has been also the argument that there is no legal impact of not realizing this project. Even the supporters were accused that they would spread lies regarding a legal need to daylight and to improve the ecological status of this stream. A recent legal opinion, worked out on this subject, clearly shows that such accusations are devoid of any legal foundation.

You can find out more about which cookies we are using or switch them off in settings.

This website uses cookies so that we can provide you with the best user experience possible. Cookie information is stored in your browser and performs functions such as recognising you when you return to our website and helping our team to understand which sections of the website you find most interesting and useful.

Strictly Necessary Cookie should be enabled at all times so that we can save your preferences for cookie settings.

If you disable this cookie, we will not be able to save your preferences. This means that every time you visit this website you will need to enable or disable cookies again.